Why use fake wasabi on superior sushi? Skip to content

Just added to your cart

Why use fake wasabi on superior sushi?

Why use fake wasabi on superior sushi? 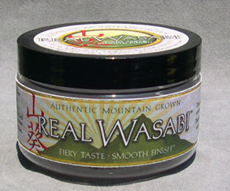 It’s like putting margarine  on fresh corn-on-the-cob. Instead, bring your container of Real Wasabi to the sushi bar and mix it in your soy sauce dish. No one else will notice you doing it (and if they do, you’ll be the most popular person at the bar)...and your taste buds will revel in the difference. Photo by Hobbes Yeo.

If you don’t like sushi, don’t have any friends who are dévotées, and have no desire to be knowledgeable on the topic of wasabi, then this is the time for you to browse THE NIBBLE™ newsletter archives for great products of the past. Or, check out the table of contents of the October issue of THE NIBBLE™ online magazine for more than 50 reviews and articles about other exciting products that might delight you.

However, if you are a wasabi user or know one, then...eureka!

We are so excited to introduce you to Real Wasabi™. *We don’t know the Japanese equivalent of eureka [“I have found it!”], but the Greek works so nicely. If you’re not excited yet, that’s O.K. We must admit, even we were a bit blasé the first time we were offered some by the manufacturer, who told us that our life to date had been a sham of faux wasabi. Our reaction: so what if we hadn’t actually been having real wasabi at the numerous sushi bars we patronize each week. We actually like the green stuff that many Japanese waiters and sushi chefs refer to as “horseradish” or “mustard” (because that’s exactly what it is—more about that in a sec). We like it so much that we generally consume every bit on our plate.

The truth is, what passes for wasabi in the U.S., in all but the most rarefied temples of Japanese cuisine is a mixture of ordinary western horseradish (Armoracia rusticana)†, Chinese mustard, cornstarch, and green food coloring. The mixture reasonably approximates its cousin, Wasabia japonica, a difficult-to-grow and therefore very pricey gourmet condiment. Even when you buy imported Japanese “wasabi” in a tin of powder or a tube of paste, provenance does not guarantee authenticity. In fact, a good rule of thumb is: most wasabi isn't, and many products claiming to contain wasabi don't. †We do not mean to disparage our own agricultural heritage: we serve horseradish at every opportunity and enjoy it very much. Cultivated in Europe since ancient times and revered for its medicinal and culinary value, it is discussed by Cato in his treatises on agriculture and by Pliny the Elder in his Natural History.

But in comparison to Wasabia japonica, it simply does not have the complexity of flavor. My goodness—such clatter over a condiment! And since everyone has been proceeding perfectly well, thank you, with the fake wasabi, why should we stop in our tracks now? For the very same reason that, once we discovered Dijon mustard, we traded in that other stuff. Once we tasted real Parmesan, we threw out the shaker can of grated “cheese.”

Real wasabi is indeed a gourmet treat—one everyone can afford.

As expensive as fresh wasabi roots are ($8 to $10 apiece), for the price of a single maki or two pieces of nigiri, you can carry a pocket-sized container that will have you “keeping it real” for months (except that all the people around you at the sushi bar will be begging for a pinch of your stock—but you can trade them for beer or saké and come out way ahead). The taste of genuine wasabi is not burning or acrid, but a warm explosion that quickly fades to a slightly sweet, lingering finish (if this sounds a bit like wine speak, one can only say: complex flavors tend to lead down that path). Real wasabi does not give you that quick rush of sinus-clearing fire. This is a princely rhizome**, not a common horseradish root. That’s why it earns the big bucks. **

All of the wasabi plant is edible including the leaves, but the rhizome, or root portion, produces the finest flavor.

Here’s some background on the precious stuff that is about to enhance your sushi and sashimi sojourns. Everything You’ll Ever Need to Know About Wasabi Wasabi is a member of the cruciferous family, that good-for-you group that includes, among others, broccoli, cabbage, horseradish and mustard. Freshly grated wasabi has a uniquely pungent flavor, similar to white horseradish and mustard. Wasabia japonica has grown wild for millennia in misty mountain stream beds; but its cultivation in Japan dates to the tenth century. It is tricky to grow, requiring cool, damp conditions—it likes cold, pristine water with just the right balance of minerals.

The Japanese have long cherished wasabi as a condiment with noodles, sushi, and sashimi.

For similar reasons, its popularity has rapidly spread throughout the U.S. But, demand outpaces the supply of this finicky vegetable; and due to its difficult growing conditions and limited availability, wasabi is still a niche crop that is very expensive to procure in the marketplace. The real deal: Wasabia japonica, a nubby, green version of its cousin, the western horseradish root (photo below). Expect to pay between $70 and $100 per pound (at seven to ten roots per pound, that’s $8 to $10 for one root); the Japanese government sells the seeds for $1 apiece, and you can buy a seedling that will produce a root of your own in 18 to 24 months for $7.50.) Little wonder we are surrounded by “faux” wasabi! Since the early part of the last century, people have attempted to cultivate wasabi in many places outside of Japan.

Only a few regions of the world have been hospitable to the plant: small areas of North America (the rain forests of the Pacific Northwest of the U.S. and Canada, and the Blue Ridge Mountains of Tennessee and North Carolina), New Zealand, Taiwan and China. Effective wasabi horticulture practices are carefully guarded secrets. Not only is it difficult to grow, it’s also very tricky to process. That’s why even in Japan the product is scarce; only an estimated five percent of sushi bars use fresh-grated wasabi, and many use “faux” wasabi.

Why Don’t We Just Call the Fake Stuff “Horseradish?”

Some say it’s a marketing ploy, but language translation may well be at fault. When introduced to Japan, the western horseradish root, Armoracia rusticana, tasted enough like the native Wasabia japonica that it was called “seiyo,” or western, wasabi. Over the years, the “seiyo” modifier was dropped, and horseradish-based exports became inaccurately labeled as “wasabi.” But now that you’re as educated on the topic as one needs to be, it’s water under the Japanese bridge.

The western horseradish root, Armoracia rusticana, is native to southeastern Europe. How Much Real Wasabi Do You Need? If you’re thinking that you don’t eat sushi often enough to own a container of the real stuff, remember that wasabi has been a flavor trend in specialty foods for the past several years. You can’t walk into a food shop without stumbling over wasabi oil, wasabi peanuts, wasabi crackers, wasabi mustard, wasabi mayonnaise (all delicious, by the way).

You can use your Real Wasabi™ virtually as you would anything else exciting in your spice cabinet.  For example:

Cocktails: If you like horseradish in your Bloody Mary (and we love it), try a dash of Real Wasabi™ paste. (If you can add freshly grated root, it’s nirvana.) Or, make a Wasabi Martini: just add the paste to your cocktail shaker.

Hors d’Oeuvres: Add one part wasabi paste to 9 parts cream cheese and serve with crackers. For hot and sweet, add chutney or cherry jam. Or, mix the paste with yogurt and/or mayonnaise to make a spread or dip.

Salad Dressings, Marinades, Sauces: Create excitement by adding approximately 10% paste by volume to your favorite vinaigrette (or to Italian or Ranch dressing). Meat & Poultry: Add some wasabi paste to your barbecue or finishing sauce (it is best used during the final ten minutes of cooking). You also can add wasabi paste to jam and thin it with a bit of water to make a finishing sauce for tenderloin, pork, chicken or fish. Ahi tuna with wasabi mashed potatoes. Photo © Sergey Kashkin. Seafood: Stir wasabi paste into your regular sauces. Obviously, this one is a natural fit, even when the fish is cooked; but don’t overlook fusion ceviche and cocktail sauce for oysters.

Veggies: One of our favorite foods in the world is wasabi mashed potatoes (in the photo above, underneath the tuna). Simply fold the wasabi paste into butter before mashing it into the potatoes. For grilled vegetables, blend the wasabi paste with butter; or mix it with mayonnaise for wasabi sauce.

Dessert:  Use the jam and wasabi finishing sauce (see Meat & Poultry, above) on fruit salsa, sorbet, or vanilla ice cream. In THE NIBBLE™ test kitchens, we’re currently working on a wasabi green tea ice cream with candied ginger ... and we’ve made two nifty granitas as palate cleansers, based on both the Bloody Mary and Wasabi Martini recipes.

Time to Get Real You may not be thinking this way, but your little container of Real Wasabi™ is about to make you a sushi bar star. Not only will your sushi and sashimi taste better, but you’ll: Get better attention from the sushi chefs, who figure you know your fish, and may turn you on to some delicacies not offered to the ordinary patron. Get better attention from the waiters, who will enjoy seeing something new. Strike up conversations with interesting folks at seats or tables on each side of you. Have something new to say—and be an opinion leader—among your foodie friends.

Real Wasabi™ will delight discriminating palates. But caveat emptor: while there is no warning label on the container, it will probably make you dissatisfied with faux wasabi, forever. —Karen Hochman FORWARD THIS NIBBLE to all of your sushi- and sashimi-loving friends, and to anyone who’d like a little spice in their lives.

Read more about wasabi in our Wasabi Q & A. If you like saké with your sushi, read all about saké in this month’s NIBBLE online magazine..

Click here for recipes in THE NIBBLE™ online magazine (TheNibble.com).